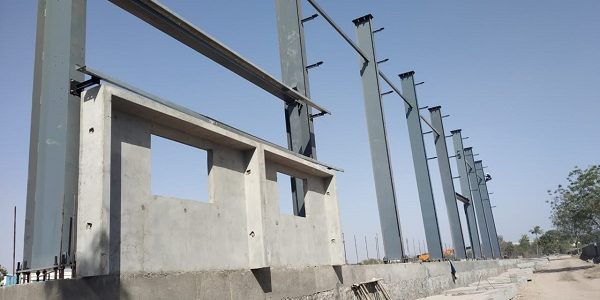 Bloks Precast is one of the best precast industrial wall manufacturers in Pune. Precast stone is distinguished from precast concrete using a fine aggregate in the mixture, so the final product approaches the appearance of naturally occurring stone. Precast concrete is a quicker way to build any type of buildings, safely and cost effective. Originally Precast  blacks developed in the plant then used in construction site, precast is one of the best way of construction.

Precast concrete is a smart way to build. Precast concrete industrial wall improves productivity of construction and quality of building and shortens construction time of a constructing building.
In order to cater the issue surrounding the shortage of affordable and low cost housing at a much competitive cost and on time schedule. It is imperative to adopt alternative construction system. Precast Concrete Construction, the so called unconventional method in an Indian Construction Industry but can cater the above needs by offering both speed and quality of the construction. Conversely Precast Building technology is confronting various challenges such as shortfall of technical know-how and majorly a general consensus prevailing within builders that Precast building technology is not a cost effective solution compared to cast in situ methodology.

In the case of concrete, there is no inherent need to achieve fire resistance by applying additional sprays and linings. This is because concrete has an inbuilt fire resistance property of its own that is present during all stages of construction. As a result this offers an inherent advantage over steel and timber solutions. Increased accuracy and quality of finish is ensured by factory production which also decreases the weather dependency. Compared with cast in suit structures, site labor is reduced by between 50% and 80% using precast.(Murchu, 2003).Speed in construction, improved quality, reduction in time and risk factors, lower cost, reduced labor and higher tolerances are significant advantages of Precast Construction.

The inception of 12th Five year plan has led the Construction activity to peaking up at unprecedented level all over the nation as multi-billion dollar project in the segment of large scale commercial, industrial, residential and infrastructure development are in the pipeline. These projects are attracting intense demand for many raw materials with cement concrete being the major stakeholder as it is the core element of every building and its application are so wide from decorative to functional. Despite the fact that a majority of Indian structures both residential ,commercial and infrastructure are being constructed in cast in situ by the traditional methodology, there is a rising popularity of precast technology. Precast technology is not a new technology in India It had been in news since decades in the segments of bridges, tunnels and flyovers and underpasses. Nevertheless until a decade back application of modern and innovative construction technology was at a slow pace due to the recession and the correction in the real estate and therefore Precast technology though widely used across the world did not attract the Indian Construction industry specially the developers across the metro cities of India.

In the event that there was one area which was not affected an extraordinary degree because of the late worldwide financial meltdown, then it must be that of precast concrete. While practically every other sector in conjunction with precast industry endured the worst part of the stoppage, things really beginning searching up for the precast concrete industry. The pace, simplicity and expense at which precast structures could be fabricated, have helped its climbing fame. In a basic structure, very nearly every element including walls, doors, windows, roof and foundation windows, top, floor and foundation could be built and later assembled using precast technology. The same simplicity of establishment has additionally made prefab structures the most favorable building systems infrastructure projects such as flyovers, bridges and large commercial complexes.

why to choose Bloks Precast?

Bloks Precast are strategic partner in implementing precast industrial wall technology. With expertise in modern precast technique, bloks precast aims to provide end to end solution, right from conceptual planning to installation, with constant involvement of our team of expert from middle-east and India.